Shopping Cart
Your Cart is Empty
Quantity:
Subtotal
Taxes
Shipping
Total
There was an error with PayPalClick here to try again

Thank you for your business!You should be receiving an order confirmation from Paypal shortly.Exit Shopping Cart

STATIONARY PLANETS IN THE NATAL CHART OR IN TRANSIT

Planets from Mercury to Pluto (yes we are including poor little Pluto) have cycles referred to as retrograde and direct motion. The Sun and the Moon never go into retrograde motion.

The outer planets remain in their stationary position much longer than the inner planets.

Some Astrologers, including this Astrologer, share the concept (through experience) that the stationary direct as well as the stationary retrograde have a very powerful influence on the energies in a natal chart.

It has been noted that an individual with a planet in a stationary position in the birth chart will have emphasize on the energies represented by the planet in question. There is also influence from the sign that the planet is in and the house that stationary planet is located in.

This Astrologer believes that if there are other signatures within the birth chart that point in the same direction and imply something very similar, this is the case, particularly if the North or South nodes are involved in the equation.

It has been suggested that someone with a stationary retrograde planet in the birth chart will at some point experience the energies related to the planet involved within the area of life the house dictates as well as the energies of the sign it falls under. However, the individual with the stationary retrograde will only discover how to use these energies after a time of lengthy inner reflection coupled with life experiences that will lead to an awakening of sorts again depending on the planet and its placement. This may take time as well as much self-study or thought-provoking experiences before it is released. This is quite similar to a retrograde planet in the birth chart as it suggests that there is some inner reflection required before action can be taken.

The energies released and the influence of the planet involved is of primary importance but the direct stationary energies seemed to come through in a much more flowing, less restrictive manner than the energies of the retrograde stationary planet.

These energies work in a similar manner through transit. For the period of time the transit influence is in effect, the individual will be subject to these energies being released. The difference between a transit and a natal positioning is that the transit is temporary in nature while the natal influence will express itself when the individual is ready during the full life cycle.

Are you interested in learning Astrology? Holm Astrology offers courses in astrology. Visit our calendar for dates at www.holmastrology.com/apps/calendar/

If you have confidential comments or questions, or if you would like to speak to us concerning the preparation of a chart, please visit www.holmastrology.com/contact-us 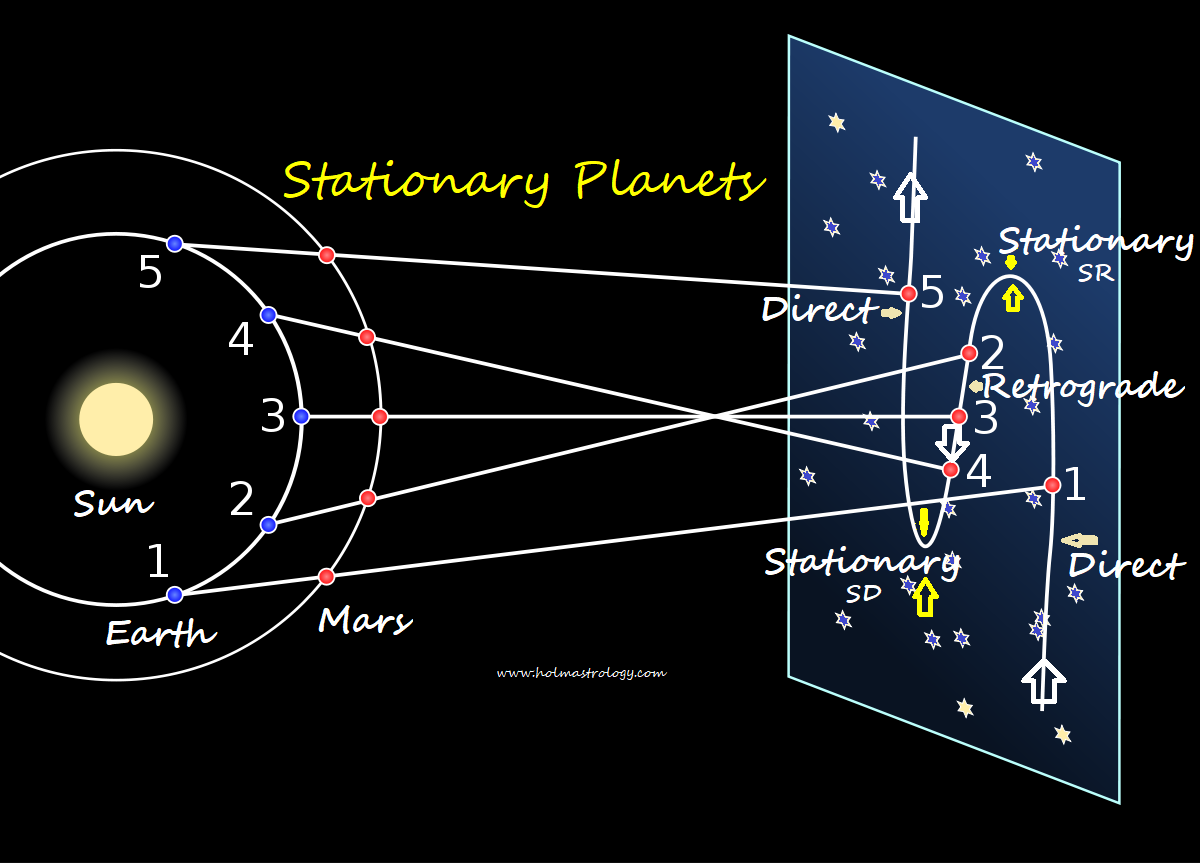 NOTE: We have used a great foundation picture from Wikipedia on retrograde and built on that to show the stationary location.

Oops, you forgot something.

The words you entered did not match the given text. Please try again.

Reply NncsCheri
6:45 PM on February 8, 2021
viagra substitute uk where to get viagra in toronto viagra

Annie says...
I was born in the mid 60's with the Pluto/Uranus conjunction in Virgo and both planets stationing to go retrograde. (Also, Jupiter retrograde stationing to go direct.). I am finding myself at age 57 experiencing a rather sudden and rapid "awakening" process. I am so interested to know if others born at this time are experiencing the same....?

Reply Annie
4:21 PM on December 7, 2020
I was born in the mid 60's with the Pluto/Uranus conjunction in Virgo and both planets stationing to go retrograde. (Also, Jupiter retrograde stationing to go direct.). I am finding myself at age 57 experiencing a rather sudden and rapid "awakening" process. I am so interested to know if others born at this time are experiencing the same....?

Reply Emma
5:30 PM on August 10, 2018
Re: Stationary planets in the natal chart or in transit. Thank-you for this article. I have venus stationary direct in Leo in my first house. I am an actor. I have looked back at important acting jobs over my career and noticed correlation with my venus return or venus conjunctions with absolute regularity. Venus is also ruler of my 10th house. It's uncanny! So very interesting...